A Tale from Rome

Allow me to regale you with a tale:

Three years ago, now, I was on a tour of one of the many ruined Roman temples in Italy. This particular temple was situated in the sanctuary of Diana Nemorensis, just off the northern shore of Lake Nemi. It rests within the Alban Hills outside Rome, one of the oldest regions of Latin settlements – the region finds representation in the Aeneid, and Aeneas is said to have married a Latin woman named Lavinia, after whom Lavinium was named. Just to put the age of this place into some context.

The site is for Diana of Nemi, and had a temple situated within a still-functioning olive grove and associated farm. At the time of my visit, tall grasses grew between the trees, and Italian wildflowers bloomed along the paths that hadn’t been beaten down by animal tracks.

The site itself was ancient. The sacred grove of Diana, which had preceded the temple’s construction, had been in use as early as the 6th century BCE and consisted of a cult image. The worship of the cult figure continued from that time until at least the time of Caesar. This local cult focused on Diana Nemorensis – Diana of the Wood – predating the period of Hellenization of the Italic peoples, and the later conflation of Italic Diana with Hellenic Artemis, in the later 4th century BCE.

My ‘tour group’, as it were, was being given a private showing of the efforts of the archaeological site. We weren’t tourists, however. We were doing archaeological excavations of our own at a nearby site located at Genzano di Roma. The sanctuary at Nemi was just one of the many local efforts by the communities in the Alban Hills to more thoroughly explore and showcase their own considerable local history.

It really is ancient, and heady stuff. Especially when one stops to consider that Italy is a country where there is more history in an 18 kilometer stretch of road than there is in the whole of the United States of America. That’s not an exaggeration.

The site was, of course, ruinous. Like so many which had been evacuated. The temple, which Vitruvius had called archaic and “Etruscan” in his On Architecture, consisted of foundations, trenches, and half-broken colonnades which form the basic layout of the temple site. These are supported by remnants of temple walls or modern retaining walls, as well as reconstructions and minor restorations. There are also “newer” buildings on the site, which had been constructed at some point between the fall of Rome and the 19th century. However, even these “modern” buildings were unsafe and dilapidated. There were no “whole” structures, just a bare facsimile of such, with semi-permanent modern protective coverings, most especially where the points of the remaining walls met.

In the intervening years, I have forgotten the name of the woman who ran the site, but she lead us alongside our own project leader. We came to this very location: 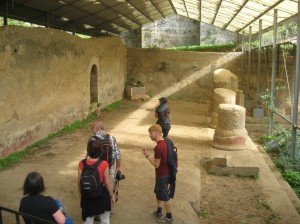 Temple of Diana Nemorensis, by Diana of “BrowsingRome.Com”, October 12, 2012

We took position against the back wall, nearest to the corner, and the site’s coordinator explained the area to us, in what I assume is a slightly more fundamentally “archaeological” way than a normal tour group. After all, we had been literally in the trenches ourselves, so we were not simple tourists. But during her discussion she spoke about the age of the site, the use of it, and derisively made a remark that there were “still some… stupid people.. who come here to leave offerings”. A glance towards the broken pedestal next to her revealed it was covered in a scattered amount of junk, but it was clear to me.

The broken stone had flowers strewn about it, placed there by other visitors. Local wildflowers, the same type as those in the olive groves and overgrown pathways of the farm, with bright pedals that offset the bleached and weary stones. Money was scattered about the top of it, too. Euro coins, and bills, and older Italian currency. Small bits of jewelry and personal baubles completed the leavings.

It was an impromptu, makeshift shrine, in the heart of the ancient and ruined sanctuary for Diana Nemorensis. Someone, many someones, out there had felt compelled for whatever reason to leave trinkets and mementos and goods behind.

They had left offerings.

The event, and the coordinator’s attitude towards it, stuck with me. There were, quite obviously, people in this very modern world, visiting this very Catholic country, that felt compelled to offer the gods items of worth and value. Despite the intervening years, despite the colonization of other religious paradigms, and despite the social outrage of others, the act was there and performed. Whether it was simply because these people felt the need to do so in light of historic provenance or actual belief is ultimately unnecessary. Something made these people do this, some part of them.

The entire event stuck with me, but most especially the attitude of the guide towards the idea of a pagan restoration of Roman worship. There were, quite obviously, people in this very modern world who viewed the Gods as deserving of offering and worship.

This act has stayed with me, throughout the past few years. And I doubt I’ll ever really forget it. Obviously, in 2013, there were people in this very modern world, in a very Roman Catholic country, who viewed for whatever reason, the Gods as deserving of offering and worship. Whether it is simply because they felt the need to due so in light of historic provenance, or through actual belief is unnecessary to determine. The act is there, performed.

Do ut Des in action.  Barring that, simple offering in recognition of worth and honor.

No matter the derision of the coordinator, which can be seen as an outgrowth of the traditional Western notions of religion and false-piety, there were people who felt it was worth their time and energy to leave tokens of appreciation, or supplication, or other purposes. There are people who do this, there are people who are called to this, these “stupid people” who leave their religious identity that they have grown up with to seemingly “regress” to a more “primitive”, or more “superstitious”, or more “false” religion.

It might be romanticizing of me to say, but I’d like to believe that there’s some part of us, collectively, that still feels the urge to do this because we remember. Because we yearn for something more than what we have, to connect with something different, but familiar. That we’re always going to be left wanting more when we take stock of our dominating religious paradigms, and that the myriad spirits and divinities which form the fundamental basis to worship for animists and polytheists fill that void which has left many of us empty and yearning. We, Pagans and polytheists both, are joined – innately and subconsciously – by many more people from the West than we realize.

I have seen it argued that the natural “default” programming for humanity is animism and polytheism. I’d really like to think so.

I know it feels the most natural, to me.

“But it does me no injury for my neighbor to say there are twenty gods or no God. It neither picks my pocket nor breaks my leg.” – Thomas Jefferson

“Moderately wise, a man should be not too crafty or clever. A learned man’s heart, whose learning is deep seldom sings with joy.” – Havamal

“And so good people can be observant even with barley groats and rustic cakes, whereas bad people cannot avoid impiety even though they stain the altars with rivers of blood.” – Seneca, On Benefits, 6.3