TO BE PERIODICALLY UPDATED

Welcome to Of Axe and Plough, my space of nearly ten years in the Pagan and Heathen blogosphere. This blog is my attempt at intellectual, theological, and cultural musings on Contemporary Paganism, Heathenry, polytheism, and the intersections of other practices in those spheres which interest me. My name is Marc, although to some I am Marcus Arminius, and I periodically write under that Latin name. To the Gauls and the gods of the Galatis, I am Allocladios Torcocaitantos.

I am a Frēosceatt Hæþen, a Freehold Heathen, and a member of þe Frīfolc, an unaffiliated practitioner in an overwhelmingly Heathen system of cosmological belief and worldview that focuses on the proliferation of housecult and domestic worship in those systems. I value and place greater importance on exoteric identity and actively work towards developing and providing thoughts, resources, and ideas for people to use as a springboard and to develop their own general knowledge of their religion.

I started to write in Contemporary Paganism years ago, before the launch of this blog. The main purpose was to give another voice which countered the images that were common in both Paganism and in Heathenry. These namely were that Pagans were overwhelmingly Celto-Wiccan in practice, and that Heathens were, well. Heathen. Since 2010, with the proliferation of polytheistic Pagan identity, I’ve joined the chorus of Pagan bloggers who are advancing a polytheistic theological paradigm, although I tend to strictly stay within this sphere of writing.

About This Blog and My Paganism

My experience within Paganism is focused around it as a contemporary edifice. I am concerned primarily with the seamless integration of particularly nuanced concepts into a day-to-day lifestyle, which might get avoided over overlooked without discussion. The meat of this blog is focused on community commentary and my private practice and theological developments, philosophical ruminations, and other miscellaneous thoughts. 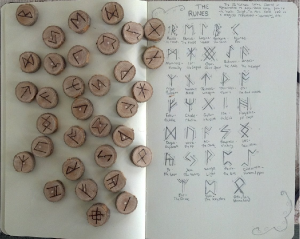 I am an animistic polytheistic practitioner that recognizes the plurality and mutability of divine experience throughout the world. I firmly believe in the efficacy of academically couched reconstructionist methodology in order to form a foundation of understanding with which we can advance and develop new methods of religious expression. This includes making use of history, historic philosophy, archaeological evidence, and other forms of comparative empiricist academia to foster a greater understanding of this practice.

Above all I do not treat this as a purely intellectualist pursuit, the application of that information to a contemporary expression is the most important endeavor I can undertake. I very much support innovation and contemporary developments which are couched in an understanding of tradition.

Additionally, I employ unverified personal gnosis, interaction with the numinous, shamanistic and “low magic” traditions, and other forms of religiosity to explore my religious place.

At one time I used to claim that I was a “dual tradition” practitioner, and while it is not an incorrect statement, it is also limiting. I’m a polytheist and recognize the mutability and interaction which can come from multiple cultural expressions mingling with each other – which are done with greater frequency in this world of the Internet and Globalization. I am an American Heathen, at my core.

I’m a practitioner of Fyrnsidu, a form of Anglo-Saxon polytheistic practice which exists in the continuum of Heathenry which is espoused by the Lārhūs Fyrnsida. My worldview and cosmology is overwhelmingly Germanic, through an Old English cultural and linguistic lens.

I also have a significant influence from Roman polytheistic practices, typically from the provinces rather than the established cults of the Celestial gods within Rome itself. This includes a plethora of deities that are Romanized Germanic or Romanized Celtic, or simply native to the location. Part of my reconstructionist interest is to speak for the deities that may no longer be around – the less-than-remembered, or those that only meet our gaze within the pages of academics. There’s a lot of cross-over in continental worship, and I am making in-roads in the study of deities on the frontier of Germania and Gaul.

I became a (poorly) practicing Pagan at the age of twelve (in 1997), and came to where I am not through the “traditional” channels (e.g. Wicca). When I was going through college I was originally on the path to becoming a Freysman, but that fell through because it stopped feeling “right”. As far as this blog goes, it is my intent to include topics and interests which relate somehow to my Pagan understanding of the world that might not necessarily exist in an exclusively religious . This includes related “occult” topics, herbalism, rune work, witchcraft, and the like.

I hold a Master of Arts degree in History, having wedged myself into studies of late Antiquity and the transitional period of the conversion. The hills and river valleys, and the forests of New England and New York State are home and in my blood, and presently I live in Rhode Island, working as an architectural engineering draftsman and assistant manager.

I also believe I am one of the few people in the Northeast that doesn’t absolutely hate the Winter.

Questions, comments, and intelligent thoughts are more than welcome. Hate and ridicule are not. Contact me at thelettuceman(at)gmail.com.

Of Axe and Plough can be found on Facebook here.

"But it does me no injury for my neighbor to say there are twenty gods or no God. It neither picks my pocket nor breaks my leg." - Thomas Jefferson

"Moderately wise, a man should be not too crafty or clever. A learned man's heart, whose learning is deep seldom sings with joy." - Havamal